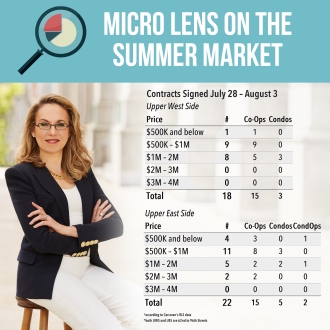 There were a total of 40 contracts signed last week under $4M on both the Upper East & West Sides; only 2 were over $2M. August should be interesting as historically it is not very active month as many people are away and it is very hot. However, this month could prove to be different as final decisions will be made on schools re-opening and there is likely deals to be had prior to September when new listings will likely come on the market.

We are happy to give you more detailed information on this data. Please reach out to Deanna at DEK@corcoran.com

Equal Housing Opportunity. This website is not the official website of The Corcoran Group or its affiliated companies, and neither The Corcoran Group nor its affiliated companies in any way warrant the accuracy of any information contained herein. Any property or services offered for sale on this website shall not be considered an offer to sell such goods or services in any state other than New York.