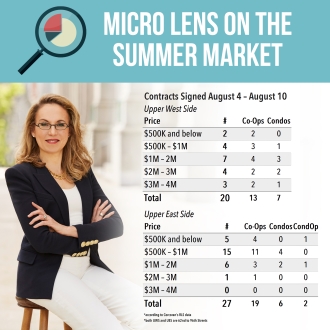 There were 47 contracts signed under $4M on the Upper East & West Sides last week over 40 the previous week. Notably, there were 8 contracts signed over $2M from zero the previous week; 7 of which were on the UWS. An increase week over week in August is a good sign as new inventory will come on in September. Last week, Governor Cuomo announced that all school districts in NY State can open based on the data but there will be things that do not make it a typical fall school season, such as remote vs in-school learning or a hybrid of the two. That being said, certainty will trigger sales as many people were paralyzed to act with an uncertain future.

The luxury market was not as active uptown with only one contract signed at 390 West End Avenue, 11G (The Apthorp) asking $6.5M. The other 5 contracts over $4M signed in the city were all downtown.

We are happy to give you more detailed information on this data. Please reach out to Deanna at DEK@corcoran.com

Equal Housing Opportunity. This website is not the official website of The Corcoran Group or its affiliated companies, and neither The Corcoran Group nor its affiliated companies in any way warrant the accuracy of any information contained herein. Any property or services offered for sale on this website shall not be considered an offer to sell such goods or services in any state other than New York.