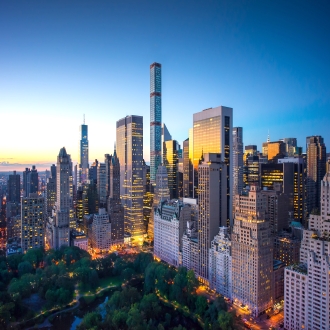 432 Park Avenue
432 Park Avenue is the second-tallest building in New York City and will be the tallest and the first luxury residential mega-tower in the Western Hemisphere. The building has redefined the skyline and is adding to the 57th corridor, which is hailed as “Billionaire’s Row.” Apartments will not close until late 2016 or later. The active Penthouse listings are hovering close to $10,000 per square foot!

520 Park Avenue
When 520 Park Avenue’s 12,394 square foot penthouse triplex hits the market, it could be the most expensive apartment in the city with an asking price of $130 million. The 54-story, 31-unit condo tower developed by Zeckendorf Development and designed by Robert A.M. Stern is scheduled for completion in 2017. Four units hit the market this spring ranging in price from $16.6M to a $70M duplex Penthouse.

807 Park Avenue
Aion Partners has owned 807 Park Avenue since 2004 and had a very difficult time selling the condos. The developer is planning to take down the 7-story addition, preserving the original 5-story structure and reconstruct a new 12-story building, which was just recently approved by the Landmarks Commission.

1010 Park Avenue
Extell is planning to build a16-story condominium where the Park Avenue Christian Church rectory and parish hall stand. Although there have been issues because of the height with the Landmarks Commission, the plans seem to be moving forward. 1000 Park views will be impacted by this contruction.

The Waldorf Astoria
Earlier this year it was also announced that the Waldorf Astoria Hotel is planning on renovating and converting the two towers into luxury residential homes. The timeline has not been announced.