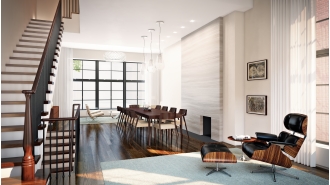 Typically the townhouse market is analyzed on a yearly basis as the average number of closings in this market are very low; the past 6 year average has been 224 sales. There were 275 closings city-wide in 2014 and only 127 of them were single-family. Below is a snapshot of sales in different neighborhoods in the first two quarters of 2015.

There were 18 townhouse sales (both multi and single-family homes) in the first half of this year (January 1 through June 30) on the Upper West Side above 57th Street. To put this in perspective, there were only 27 townhouse sales in 2014 all year from 34th to 110th Street on the West Side. The average number of West Side single-family sales in the past 3 years is 18, and the average number of multi-family sales over same time frame is 10.

Single-Family Sales
Below is a list of all the single-family homes that closed during the first two quarters this year.

After less than 5 months on the market, one of the last remaining houses on the avenue, 247 Central Park West, closed in January for $25M; the record high for a single-family home on the West Side.

In downtown neighborhoods (Chelsea, Flatiron, Gramercy, West and Greenwich Village, Soho, and Tribeca) the first half of this year, there were 24 single-family closings. Almost all of them were in either the West Village or Greenwich Village with only 2 in Chelsea and 1 in Soho/Nolita.

Chelsea
231 West 22nd Street sold for $9.5M in May. Featuring an immaculate renovation with 6,000 square feet and 1,450 exterior square feet, comprised of a front and back yard and roof deck with a swim spa and resistance pool.

Soho/Nolita
32 Dominick Street sold for $4.1M. Built in 1826, this 3.5 landmarked Federal style house was in need of renovation.