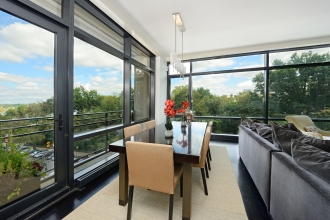 New development units led the way in terms of record sales prices. The large number of high end sales in the new development market had a huge impact on the overall perception of the NYC real estate market, yet new development currently makes up only 11% of the total market! It is evident why there was so much press attention on this segment: new development closings in Q2 2015 increased 64% from a year ago, and available new development listings were up 30% compared to last year. (There were 294 sales in Q2 2014 and 481 in Q2 2015). Record high prices of a small percentage of units can skew the average or median price point of a market segment higher. For example, closings of high priced units at the Carlton House (21 East 61st Street) and The Charles (1355 First Avenue at 72nd Street) pushed the East Side median price for new developments to $7.328M! The next highest median price of any neighborhood was nearly half that at $3.954M downtown.

Properties sold off the floor plans also have an appeal to buyers who are looking to purchase “pre-construction”, who will have better choices within that building and will potentially see values appreciate by the time they close 1-2 years down the road.

In addition, the finishes in brand new luxury buildings in many cases have a much higher design aesthetic and quality, ultimately creating a spectacular product. In the past 20 years, it was more common for people to buy an apartment for the floor plan, the views, and the building cache – they would expect to customize their unit once it closed. Now developers want prospective purchasers to buy unfinished units in part because the finishes can be tailored to the buyer’s needs. Working with top “star” architects and international designers has become more common in this luxury segment.

Location and views that cannot be disturbed in those new ultra-luxury buildings, especially on ‘Billionaire’s Row’, have – for good reason – become status symbols.

There were very few new development closings in the first half of this year. Closings in the now-famous One57 averaged nearly $6,000 per square foot, which affected average square foot numbers significantly. On the other end of the spectrum was a wonderful new conversion of a prewar rental to condo called the Mirabeau, located on 91st Street and Amsterdam Avenue, which had several closings averaging $1,800 per square foot. Due to the limited number of new development closings in the beginning of the year and the widely varied price points, the Upper West Side averages are less indicative of the true market condition than other neighborhoods.

50 Riverside Boulevard (between 61st and 62nd Street) is another new development which had 90% of the units in contract over the summer. Closings have just begun to take place; however, these closed sales do not figure into the picture of the first half year’s sales. There are also several luxury conversions on the Upper West Side that have opened sales offices since April. They include The Astor (235 West 75th Street), The Chatsworth (344 West 72nd Street), 360 Central Park West (at 96th Street) and The Orleans (100 West 80th Street). A new building at 1 West End Avenue (between 59th and 60th Streets) also commenced pre-sales in May of this year and will have 246 units with an estimated occupancy at the end of 2017.